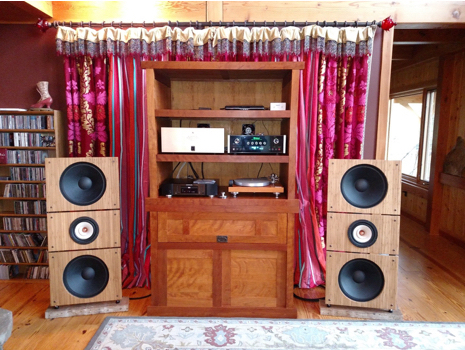 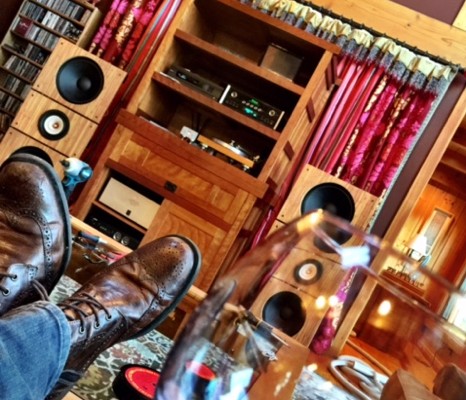 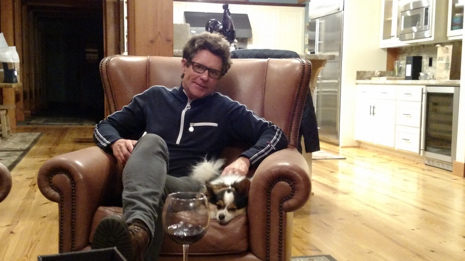 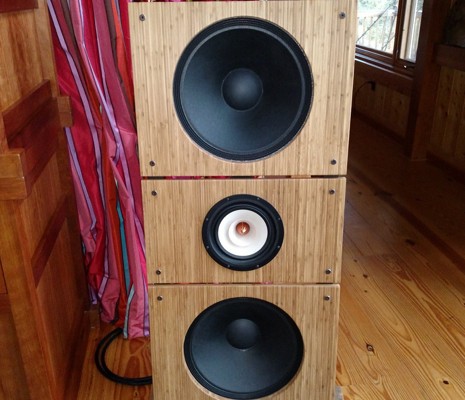 I don’t normally write reviews, but every once in a while I have an experience that leads me to praise and promote a service and/or product.  I feel that Grant Fidelity and the PureAudioProject Trio15 open baffle speaker have earned such praise, so I thought I’d write about my experience.

Many (many) years ago, when I was an ambitious lad working 12-14 hour days, I would get off the train in Oakland at 9:30 and stop in at Eve’s Hunan for a late-night meal before they closed at 10pm.  Eve’s was a typical, low-key Chinese joint; mom-n-pop, simple menu, great prices, threadbare décor.  The owner, Becky, and her crew would always prepare a delicious, fresh meal for me and would allow me to lounge and decompress over conversation and warm tea until well after closing time.  I appreciated that experience – the food and service — so much that I wrote a short, informal “review”; a one-pager that I printed up on a sheet and brought in for Becky, so that she would know how appreciative I was.  In that review I referred to Eve’s Hunan as Becky’s Place, since she was the owner and the face of the restaurant from open ‘til closing.  Becky taped it to the inside of her front window, where it parched, faded, and collected flies.  A couple years later she closed the restaurant for a remodel (and, alas, removed my review).  It re-opened a couple months later as Becky’s Place and still thrives to this day under that name and ownership.  I take some pride in that — I’m not sure why.  But it does remind me that our praise carries weight far greater than its words, and lasts long after the experience.

I’m not an Audiophile – at least not compared to the audiophiles that I’ve met.  I tend to choose gear as much for its lifestyle fit as I do for its sound.  Equipment stays off the floor, wires are well hidden, and I pay as much attention to friends, food, and wine as I do to the music I have palying.  But I do like good music performed well that sounds good, and the better it sounds, the better (and louder) I like it, and the more I like to share it.  Friends come over all the time and marvel at how life-like my systems sound, many claiming that it’s the best music they’ve ever heard — better than “live”.  To that end I’ve gone through my share of great gear.  But over time my system had become a bit overgrown and cumbersome, and like a junkie looking for the next stronger drug, now I was battling three demons; a huge, difficult listening room, a need for a spouse-friendly aesthetic, and the demon that grabs us all — the desire for newer, better gear and a grander “oooh-ahhh” from my listening experience.

My path to the PureAudioProject (PAP) Trio15s was somewhat accidental.  After years of gear-swapping, ever-increasing amplifier power, and speakers to match, I decided to make a “right” turn and try something new.  It’s not that I didn’t enjoy all the iterations of my various systems, it’s just that they had lost some of their excitement and so had my listening.  So off I went, down a new path, following a new paradigm; low-powered tube amplification and high-sensitivity speakers.  I started my search and research, and my quest for efficient speakers led me from horns to open baffles, and from there, the choices narrowed significantly.  Although I’d never actually heard PAP speakers, they had the combination of an interesting concept, unique appearance, world-beating reviews, and a relatively affordable price.  The fact that their components are sourced, world-wide, from highly reputable manufacturers made it a less risky gamble, and unlike other open baffle brands, I could drive the speakers with a single stereo amp (bi-amping is not spouse friendly).  I contacted their North American distributor, Grant Fidelity in Canada, and had a great chain of conversation, both via email and phone, with Rachel Zhang, the owner of Grant.  Hey, any time you can shoot off an email at 11pm and get a thorough, thoughtful response from the owner by midnight, you can feel fairly confident that the service will be outstanding.  And it just so happens that Grant was having a special on their show demos to make way for newer models.  Did someone say “sale?”  So, on a semi-informed hunch and a whim, I dropped 3+ Large and ordered a pair of the PureAudioProject (PAP) Trio15s with custom finished Plyboo baffles, and waited for my package(s) to arrive.

And arrive they did; from Iowa, China, Israel, and Germany.  Almost everything arrived within a week, except for my custom-finished, Caramel Plyboo baffles, which took an extra couple weeks (and boy, do they look sweet!).  I’m going to skip writing in any detail about the whole assembly process.  It’s been well-documented online.  I’m fairly handy with tools and my fingers, and except for the shear nervous excitement that might have led to a dinged baffle or dented driver, the speakers were a breeze to put together.  I will give special kudos to the guys in Iowa for their thoughtful packaging of the baffles.  Not only did they arrive in perfect condition, but each baffle was marked for specific position in the speaker so that the grain would be continuous.  Smart!  Quibbles? Hmmm…, I’m gonna have to dig for this.  I’ve read that the full-range drivers are positioned too low, and that the speaker needs to be elevated.  True, the Tang Bands seem to be pointed at my chest as built, so I used some reclaimed 2×6 timber planks (from an old bridge in Ukiah) and left the rear foot off to get the drivers pointed right at my head.  And I guess the wire leads could have been cut a little shorter as to not dangle so much from the drivers.  But these are minor quibbles and easily fixed – either by the user or at the factory.

Okay!  Now, on to the listening.  Here again, so much has been written about the qualities of the PAP Trio15 speaker s, that I feel it’s not my place to write any further about them.  Really, I have nothing more to add to the praise that’s already been heaped upon them by far more sophisticated appraisers than I.

What I can write about is how much sheer enjoyment I experienced on that first listen.  After re-arranging my living room to accommodate for optimizing the open baffle speakers’ placement (and a spouse-friendly aesthetic), and installing my new 300B Canary amp in my system, it was time for the unveiling.  I invited my best listening buddy over (not the dog, the guy next to the dog), cracked an excellent bottle of Napa Syrah, and we set our minds on giving a first listen before we headed out for dinner and a movie.  Hey, we had an hour to kill; certainly enough time to make a solid assessment and first impression.  Right.  No sooner had the opening notes of Santana’s Black Magic Women (180g Mofi) filled the room, then I knew – we both knew – that we had “stumbled” upon something very special.  We were mesmerized.  So we settled in and began to play favorite tracks from favorite discs.  Supertramp, Crime of the Century (UHQR), Ricki Lee, Pirates (CD), Steely Dan, Gaucho (SACD), Keb’ Mo’s BluesAmerica (180g), Norah Jones, Come Away With me (SACD).  What started as a quick listening session turned into 3 hours of flippin’ and spinnin’ discs.  Instead of listening to one track per album, we were so entranced and excited that we wanted to hear each of our favorite tracks from each of the albums.  Honestly, it was the most enjoyable listening session that I can remember having.  Kick drums and bass notes were life-like and 3-dimensional without being overpowering.  Voices hung in the air with all the depth that the recording would allow.  Cymbals shimmered.  Being able to use the room and let the drivers radiate naturally turned every track – no, every instrument and voice – holographic.  Whether it was the sweet little guitar lick on Norah Jones’ Nightingale, or the opening percussion on Talking Heads’, Burning Down The House.  That “little” (40-pound beast) 22w/ch amp paired with the Trio 15s absolutely filled my huge space with live performance levels of sound.  Imaging?  In the room!  And although there is always a “sweet spot” for best listening, from anywhere in the room, the impact and holographic presentation was palpable.  I’ve heard some damn fine speakers make some damn fine sounds in my day, but the Trio15s took this to a whole ‘nutha level.  Every instrument and voice occupied and owned its own space in the given composition.  It was truly remarkable.  I’m sure that the good wine, fine-ass ancillary gear, and excellent company had something to do with it, but both my buddy and I had a smile from ear-to-ear for the (screw the movie) entire 3 hours, and spoke about the speakers for another couple hours over dinner.   As I write this, he’s figuring out a way to make the PAP Trio15s work in his home.  Mind you, these badboys need plenty of break-in, but like good wine, if it’s delicious in the cask, it’ll be that much better with age.  For the first time in a long time, I’m truly excited; not just about getting into my next listening session, but for having all my friends that have swooned over previous sounds to come for a visit and immerse themselves in the joyous noise that these speakers make.  And I have some Stephen Stills, Jethro Tull, Eric Clapton and Chet Baker all lined up for the occasion.  How sweet is that?!

I’m guessing that if my “hunch” were left to itself, I might not have made the move to the PAP speakers.  But the hunch, combined with Ms. Zhang’s understated enthusiasm and excellent follow-up, helped guide me to a whole new dimension of listening enjoyment.  So thank you, Rachel, for that, and please welcome a new devotee to the fellowship of SET/open baffle listening.

Attached are a few photos: of my best listening buddies; Of the tools I used for construction; of the view from “my” chair; of the room; of the system; of one of the speakers atop its timber plank.