Trio15 with Altec 756B full range and Jensen RP302 tweeter 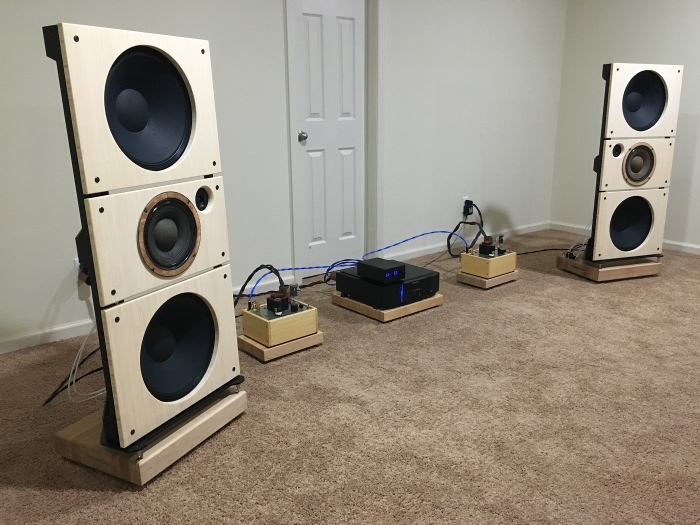 Hi Ze’ev: The path that led to me to my Trio 15 custom build may be of interest to some audiophiles. I was using vintage ALTEC 10″ 756B “full-range” drivers and Jensen RP302 tweeters in Western Electric designed sloped baffle cabinets. After reading about the JE Labs open baffles, based on a Japanese design, I decided to give them a try. The drivers worked so well on the OBs, that they never went back into the WE designed cabinets.

I used the JE Labs OBs, with a powered sub-woofer, for about 10 years. During that time period, it bothered me that those baffles are so wide (almost 3 feet). I felt that they were messing up the rear corners of the soundstage. I started thinking about making a change and if I was going to do so, I would want an integrated solution that would eliminate the need for a separate powered sub.

After considering all of my options and the desire to keep my vintage drivers, I commissioned Pure Audio Project to create a custom build using my 756Bs and RP302s. In both previous implementations, those two drivers were aligned vertically. This was not possible with the PAP OBs, so Thomas from PAP came up with a simple but elegant design which works very well!

Up until a couple of months ago, I was bi-amping my TRIO 15s using Bottlehead Paramount 300Bs on top and a Crown DriveCore 2 amp with built-in DSP crossover on the woofers. That worked fine but one day I decided to see if the Paramount amps were up to the challenge of driving the speakers full-range.

I order to do that, I purchased a pair of 4-ohm 80hz, 12/dB octave low-pass filters from Parts Express. The experiment was a success and much better than expected but only after I reversed the +/- speaker wires on the woofers. Those passive filters put the woofers 180 degrees out-of-phase and I was getting significant low-frequency cancellation from the 756Bs. Note that the ALTEC drivers run full-range and there’s just a cap on the tweeters.

This is all good except I realized that now I’m running the Paramount amps using 8-ohm taps into less than 4-ohm speakers (the amps do not have 4 ohm taps). Coincidentally, at this time, a local audio buddy was selling his pair of Electraprint DRD 300B mono amps for a very reasonable price. I acquired them because they have 4 ohm taps. My initial thought was that if they sound as good as the Bottlehead amps, I will keep them instead.

The DRD amps are working great with my Trio 15s but then I came across your new PAP-C1 crossover. I still have both sets of 300B mono block amps, so now the question is to actively bi-amp or not with the outboard PAP-C1 electronic crossover? Thanks for offering such an outstanding product such as the Trio 15s! 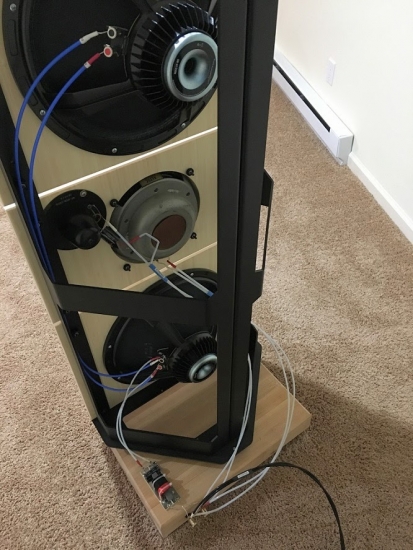