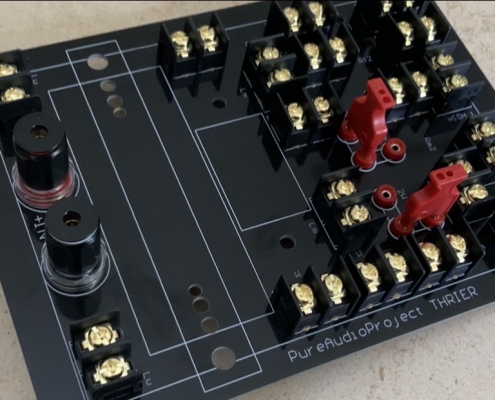 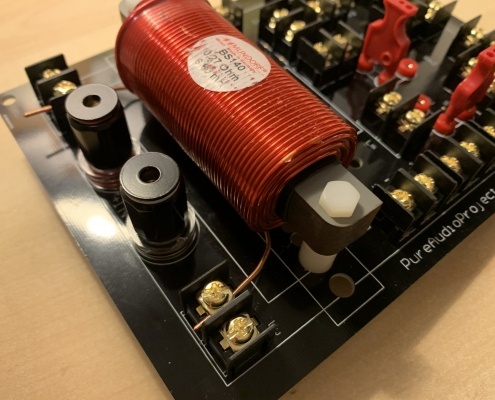 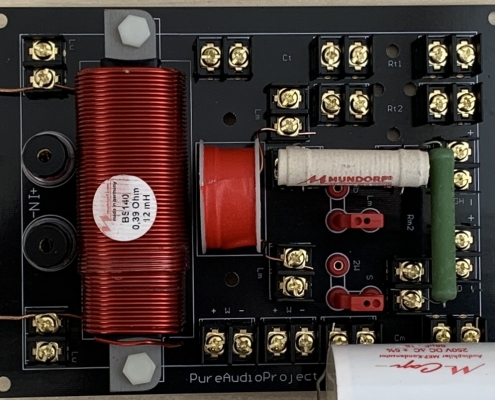 Swapping components with a screwdriver allows customers to experiment various components and carefully voice the crossover to the specific listening environment, sonic signature of their gear, and sonic taste.

Q: What is the Thrier Crossover ?

The name ‘Thrier’ Crossover stands for ‘Three in One’ functions, typical two way first order crossover, series or parallel topology and an additional channel if needed.

The components on Thrier Crossover are not soldered but mounted on screw terminals.

Most* of our models operate with a two way series topology, while in some models parallel topology is preferable.

Currently, the third channel is used only in our Quintet10 Stellar model.

Q: How does the Thrier Two Way Series Topology work ?

A: Differently from typical parallel two way crossover topology, in series topology the woofers and the center driver are in series. They therefore perform independently in their main frequency range (woofers at the lows and FR at the mid and highs), while playing together and blending in phase in the ‘cross range’.

Q: How do I decide about the value of the components ?

A: We provide all components for a default set-up. Our stock option features carefully chosen audiophile-grade components, all made by Mundorf, Germany. Fans can experiment additional options, swap and evaluate various components, use different brands, grades, materials and build.

Q: Can the Thrier Crossover work with any drivers ?

A: Electronically it can however this topology will not be too forgiving with drivers that are less than top-grade as far as build and performances along the entire frequency range are concerned. Thrier Crossovers were designed around our custom Open Baffle woofers. Both, the 15″ and the 10″ woofers are designed specifically for Open Baffle and excel to perform along a wide frequency range. The OB-A15Neo woofers play up to 1khz and more while our 10″ drivers can be taken up to 6.5khz !