You are here: Home / 6moons-Review-Duet15-Part2

Real-life Part 2 of the ‘Crumbled’ (not completed) 6moons Review, of the Duet15 Prelude Voxativ 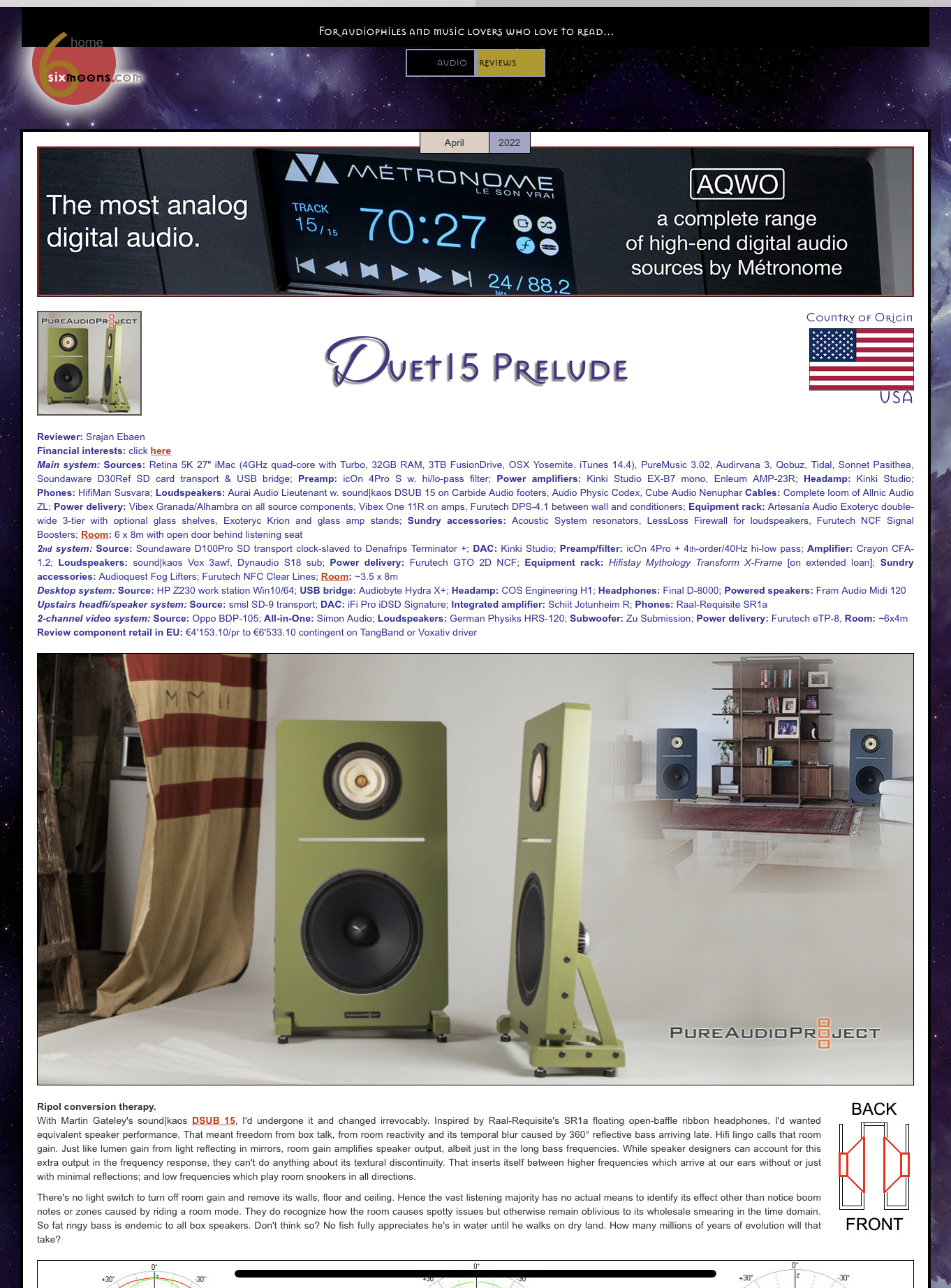 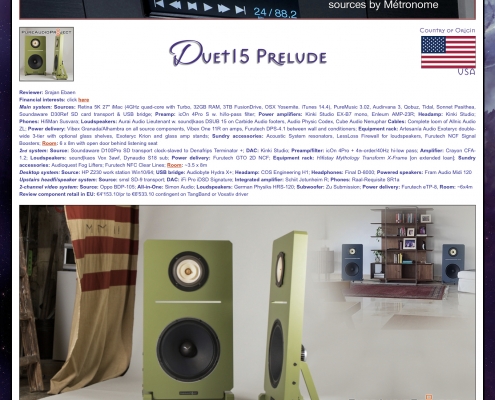 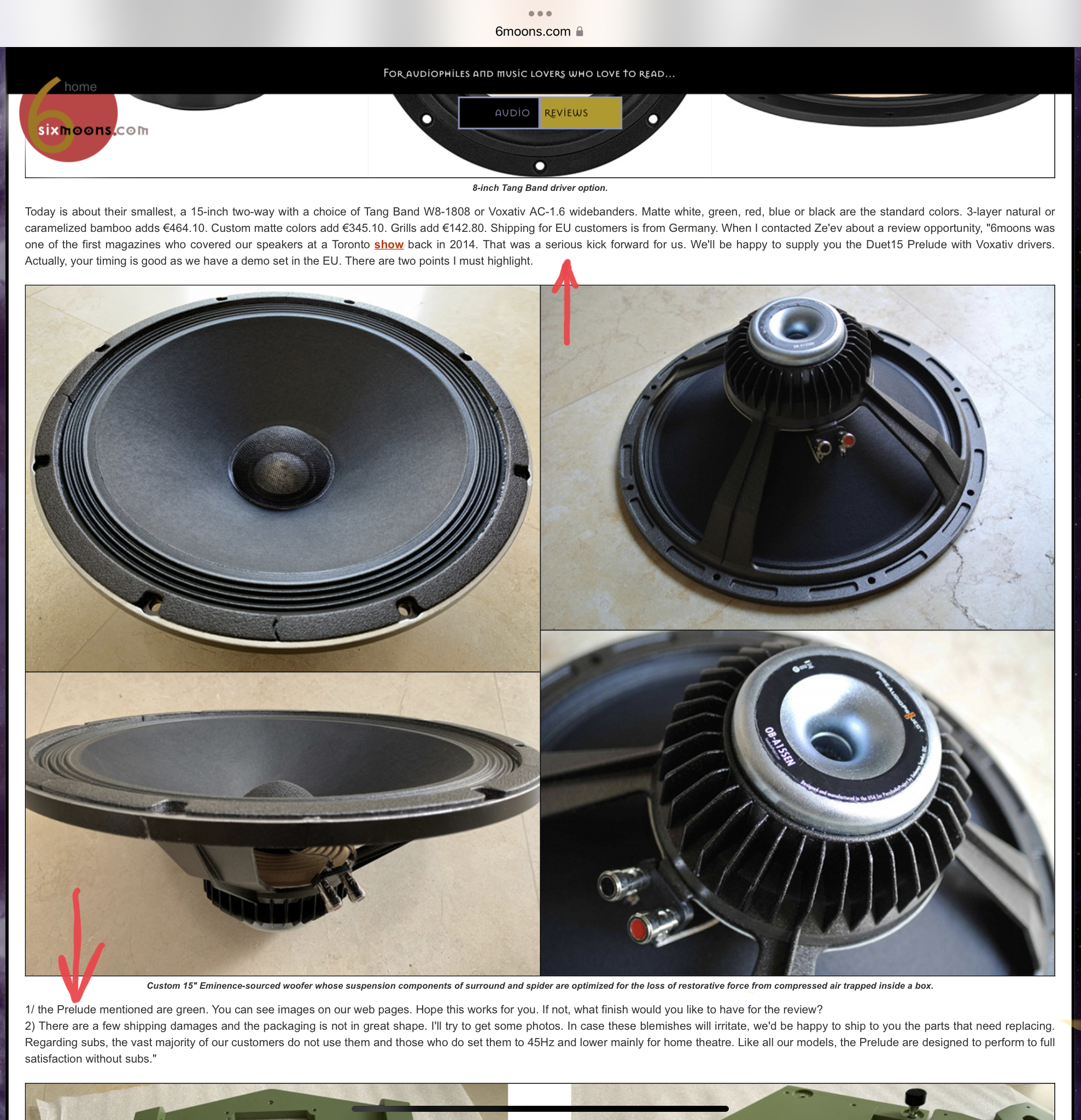 Was not published by the reviewer 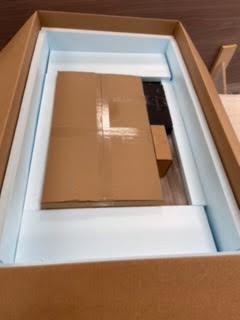 We had numerous professional reviews over the years. Leaving aside the tension of waiting to hear from the reviewers about their impressions, communication and collaboration with the reviewers was always a pleasant and fulfilling experience. These guys have quite a bit of experience!

One review was ‘crumbled,’ and this occurred before the reviewer heard a single note from the speakers. The communication and atmosphere with the reviewer had deteriorated to the point where we felt ‘that’s it,’, ‘enough is enough’. This was the 6moons review by Srajan Ebaen.

As a follow-up to this ‘crumbled’ review (as Srajan dubbed it), here are a few more details for readers to get a full picture of the event, as well as a ‘Part 2’ of the review, which is feedback from a customer who purchased the ‘review set’ immediately after it was collected from Srajan (before the assembly was completed by him).

– Providing brand new speakers for a review is not cheap, and the fact that Srajan is located in Ireland (EU part) complicates things even more logistically and financially (due to import and customs release issues). As a result, we proposed providing a ‘previously demo’ed’ Duet15 that was available in Europe at the time. We specifically informed the reviewer that the packaging is in poor condition and that if any items are damaged during shipping, we will simply replace them with new ones. Before beginning the review, the reviewer confirmed all of this, and he even mentioned this arrangement in the opening of his ‘Part 1 Review’ (see the red pointers). By all accounts, this is a reasonable arrangement.

– Frankly speaking, we’ve made similar arrangements with other review media in the past. All have been well received by our collaborators. This was not the case with this reviewer. The packaging of the pre-demo’d set was in poor condition, and some items were indeed damaged during shipping. We then began receiving emails from the reviewer with annoyingly ‘patronizing’ comments, and while attempting to communicate on these, we were surprised to learn that the reviewer not only went ahead with the review but covered with great enthusiasm specifically the packaging and shipping damages, all before allowing proper replacement as agreed.

– In this ‘Part 1’ review, the reviewer also made a few personal comments about the company that are completely unfounded. One such comment even personally insulted one of our employees when her private name was mentioned in public with a bold hint that she (and we) were dishonest with him regarding the details we provided about the shipping process. Again, this was incorrect, patronizing, and completely out of context. (See photo of our packaging of the Duet15 Prelude enclosure as sent to customers)

– At the time, the reviewer had yet to receive the woofers. These were agreed to be broken-in specifically for him and to be shipped in a separate box. As a result, he had not yet heard the speakers. A few more emails were exchanged between us and the reviewer, but again, there was no real success in getting the communication on a ‘pleasant’ path but rather the opposite, and this is an understatement.

– After careful consideration, we decided not to supply the woofers to the reviewer, but instead to withdraw the review set and offer it to our EU customers/followers through our own marketing channel.

The ‘demoed, then ‘half reviewed’ set was quickly sold to an enthusiastic music fan, and few weeks after delivery we received the following in-depth feedback (see below)…

A ‘crumbled cookie’ – as stated in the 6moons.com review – turned back into a delicious dessert for a music-loving customer! ??

The End of the Drama. Curtains down. Back to listening to music and thanks for reading!

Part 2 Review, by a customer in the Netherlands 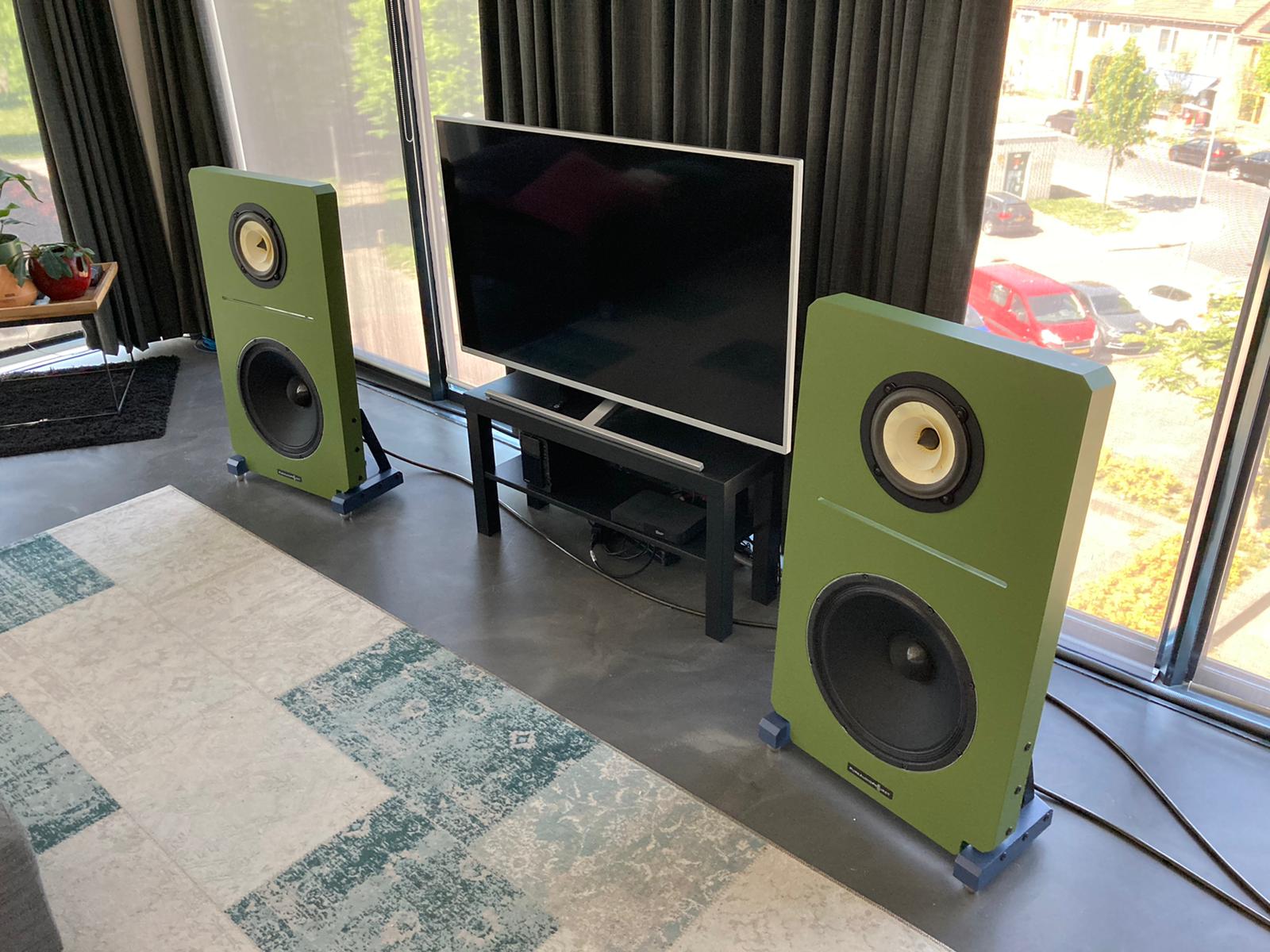 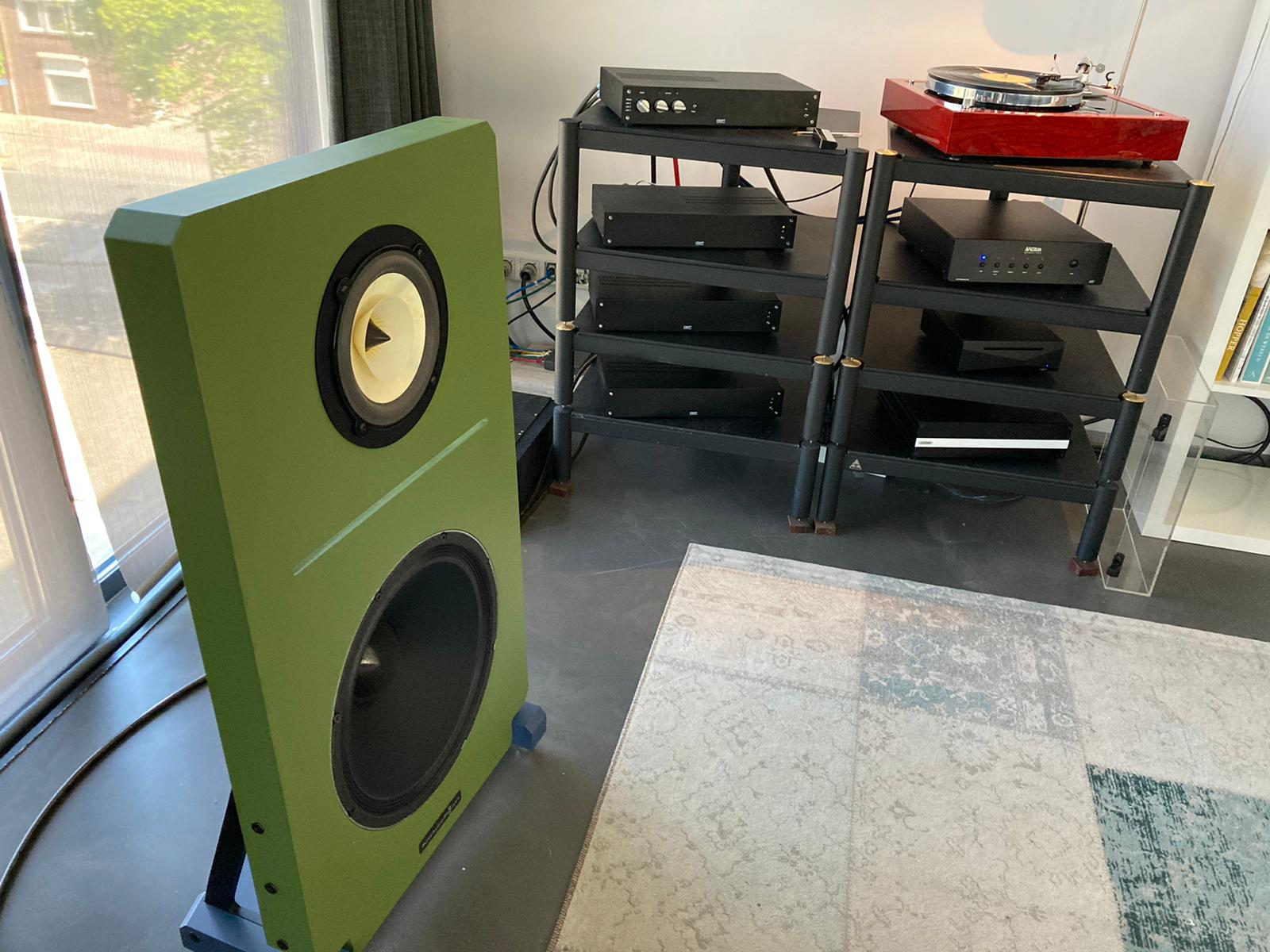 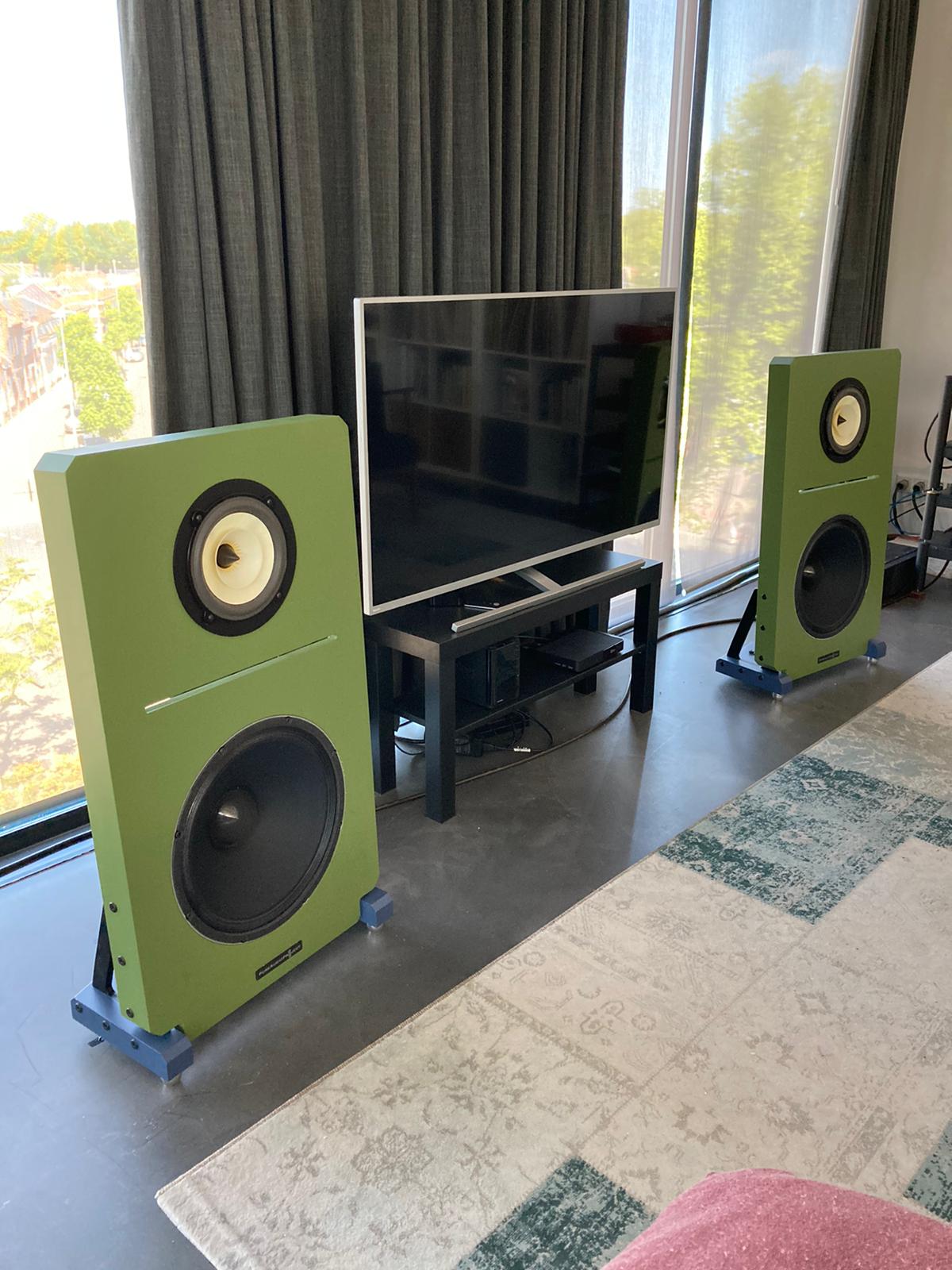 “After a short week of listening to the Duets I owe you a small report.

Installing the duets on Saturday was easy and straight forwarded, however with some help from my son.

Listening for the first time is very exiting. I was immediately happy with the combination with my Crofts, I was especially worried about the volume, but the Duets react about the same way as the ‘———-‘…

Of course I listened to all kind of music and the listening journey came with big highs and lows. The lows where especilally related to lack of bass at times. Unpredictable. I realized that it isn’t fair to judge this when there isn’t a proper break in time. I was lucky to work all week at home, so I switched in to a classical radio station and let it play most of the days during this week.

Yesterday I shoved the speakers around to find a good sweet spot and ended up a little closer to the back wall and a little toe-in. Bass immediately improved.

The Voxativ driver is unbelievable. The clear tones, no harshness, the openness, the Hughe sound stage. Really really impressive.

Somehow the Neo’s also opened up. The bass is excellent, very clear too, and very detailed.

My room is very difficult with a lot of glass and with the ———- I always had trouble with treble. The harshness, even distortion in high, loud strings and vocal passages are totally gone.

I couldn’t resist to hook up an old solid state power amp, a Belles 350A, to replace the Croft mono’s…. No…. Not a chance. I noticed further that the crofts really need warming up time to make the Duets sing… I never noticed that with the ‘———-‘…